November 7, 2018:  Our loving Shih Tzu , “LOUIE” crossed the rainbow bridge this afternoon – just a few months into his fifteenth year, and after many more months of rapidly progressing troubles with his vision, his hearing, his kidneys and his hindquarters.  About the only part of him that remained unaffected throughout all his trials was his sparkling personality, his determination to please, his gentlemanly demeanor and his power to show love.

LOUIE joined our family in late summer of 2004, shortly after he was able to leave his parents,  our son’s full-blooded Shih Tzus, “SKIP,” and “MILLY.”

We still lived in Kansas, then, which meant his potty training had to be done in the teeth of an oncoming prairie winter – not an easy task for any breed, but that’s when this little guy showed us that not even a tornado could be any match for him, once he made up his mind to do something.

LOUIE was our first Shih Tzu, and the first dog we’d had in the family in at least the 20 years since our kids had left home, so we had a lot of re-learning to do, and he proved to be an able and a patient teacher.  A Shih Tzu, he taught us, doesn’t bark for attention; he talks to you and, more important,  He will probably always understand more of your vocabulary than you will ever understand of his.  So, our work was cut out for us.

He couldn’t have been more than 6 months old when, one day he got tired of waiting for us to notice that his water bowl was empty so, while we were out of the house he scooted it clear across the kitchen, from the back door to the sink.  When we returned, we found him politely sitting next to the bowl, in front of the sink with a distinctive look of “Well, what kept you?” 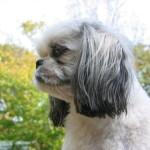 When LOUIE was 3, we moved to the Mark Twain Forest in the Ozarks of Southern Missouri, just a few miles North of the Arkansas border.  It didn’t take him long to become the ‘Terror of Squirreldom,” and he remained so, up until a year ago when his hindquarters began to fail him.  He loved being a Country Shih Tzu: the room to roam, the critters to chase and the paths to walk this old man at least once daily.

In LOUIE’s fifth year as the only dog in the house we rescued a loving little 3-year old Shih Tzu mix named “LILA.”

She was given to us by an owner who worked two jobs and whose grandchildren had abused her something terrible.  LILA had been born the runt of her litter and weighed only 6 pounds when she came to us.  LOUIE wasn’t altogether thrilled, but always the gentleman, he accepted her into the family and, if grudgingly, he didn’t show it.

As laid-back and gentlemanly as LOUIE was, LILA had a no-nonsense, ‘take-charge’ personality, as if descended from a long line of longshoremen and drill sergeants.  The first thing she taught him was to bark when something needed attention – no more of this ‘talking’ to humans then hoping and waiting for them to understand or pay attention.

LOUIE was 7 in 2011, when he was diagnosed with Cushing’s Disease – a Kidney condition that is treatable but which may shorten a dog’s life by about two years, we were told.  His daily medications seemed to work well for about 4 years then his appetite began to wane, and it became more and more difficult for us old-timers to keep on schedule.

Not long after that we got a call, one day, from his groomer who told us his eye had started bleeding, and he should see the vet right away.  That afternoon he came home from his vet after his right eye had been removed.   He resumed life as though nothing had happened, but now free of the pain he had been suffering, unbeknownst to his aging owners.

Our favorite pet products place, “Chewy.com,” once asked its customers to submit a photo of their dog with a container in which their product had been shipped.  we sent a shot of LOUIE, in a box, on the porch.  We were surprised and delighted, a week or so later, to receive an oil painting of that photo, mounted and now located above where his living-room bed was once placed.  Thanks for the memories, Chewy.com!

This morning, LOUIE awoke and sat up in his bed, in its usual spot at the foot of momma’s bed, and looked all around.  Then he looked all around himself again, and again another time, as if he were looking for something.  He wouldn’t leave his bed as is normal, in spite of much coaxing by me.  His arthritic hindquarters could no longer do the job.

Finally, I picked up his little 17-pound body and carried him outside because that is always his first stop of any day.  That’s when I realized that when he had awakened, he was puzzled by the experience of being totally blind, for the first time in his life.

As suddenly as his first eye problem had appeared this one did, too. And, it was the same problem – a ruptured cornea melting that was causing more trauma than what his daily pain medicines could handle.

Those heavy pain meds were already a daily routine.  They were issued years ago as his arthritis got progressively worse. He hadn’t been able to hold up that trademark Shih Tzu tail for at least a year, or hike a leg to pee for the past 6 months. In the past 3 months his hips started giving out and he often had to drag his hind legs while on smooth surfaces.

Given the inevitably painful surgery to remove his eye, his failing kidneys and his irreparably crippled hindquarters Louie could only face a lonely future, mostly bed-ridden, and with an otherwise poor quality-of-life.  We will suffer his passing for a long time, after our 14+ years together, but take comfort in that he is no longer in pain.

One day I will take his ashes, and those of LILA our rescue Shih Tzu, with me when I go to the rainbow bridge to re-join both of them again. 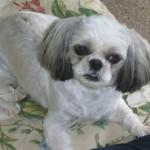 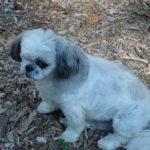 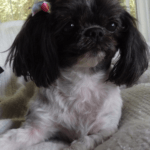