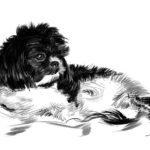 November 13, 2017: LILA enjoyed a peaceful sleep last night, in momma’s living room chair, as usual. She normally awakens me at 6:00 every morning but today it was almost 9:00 – after Louie and I returned from “my” morning walk – when LILA finally showed up in the hall.

On her way to her potty pad she suddenly collapsed, screaming in pain like never before, and unable to stand again. I picked her up gently and took her outside where she proceeded to do her business while momma called the vet to say we were on our way.

Less than an hour later she had another seizure, and passed away in my arms, in the vet’s examining room, just as the vet was reporting an irregular heartbeat, and all the other symptoms of severe heart failure. She was 11 years old. 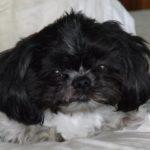 LILA came to live with us here at Shih Tzu Mania Manor eight years ago, a rescue who suffered a 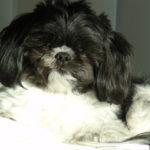 first 3-years that shouldn’t happen to a dog. She never got over her fear of a garden hose, a hair brush, any child younger than 14, or being picked up, for fear of being dropped down again.

Her fur was stiff as a paintbrush, and her trachea constricted by 50% but a new diet restored her Shih Tzu soft fur, daily dosages of Theophylline kept her choking seizures under control, and early laser treatments treated her damaged spine. What really saved her, though, was her own resilience, and a fighting spirit that was nothing less than inspirational. 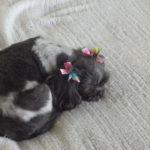 My own theory has always been that most angels come to earth on more than two legs and, what we learned from this little 8-pound dynamo goes a long way to prove that theory. She rested in my lap as I drove her to the crematorium, because she always loved to “help” me drive the Avalanche. One day her ashes will rest with mine while she waits for me to rejoin her at the rainbow bridge. 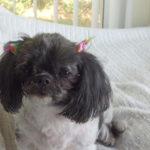