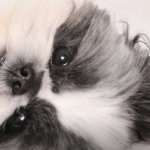 “This is my Shih Tzu, Henry. He is a therapy dog. Shih Tzus make the best therapy dogs because of their naturally friendly demeanor, their size (they are small enough to sit on laps, but not so small that they are fragile), their very-little-shedding coats, and their irresistibly adorable appearance! 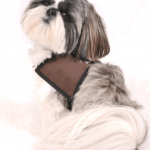 Therapy dogs are like ambassadors for their breed; some people may not like little dogs in general but, after meeting Henry, they become the breed’s newest fans!

Therapy work is the BEST way to volunteer! Henry also has his own facebook page:

and anyone interested in learning more can contact me from there about helping their Shih Tzu become a therapy dog.

Henry is a dog dedicated to making people smile! His Facebook page chronicles his adventures in animal-assisted activities and therapy: 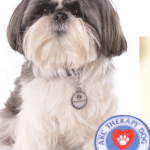 Henry is a well-socialized and loves people; he is basically obedience trained. That’s all it takes! Once I thought Henry was ready to become a therapy dog, we took the AKC Canine Good Citizen test. It took a few tries, but once he finally passed, he took his first therapy dog test. Henry has never looked back since! He loves to visit people and instinctively knows who needs him most. He does a happy dance when he sees me get out his therapy dog vest, and on the days that we regularly go visiting he waits by the door and barks so I won’t forget!

Here are some accounts of some of Henry’s favorite visiting memories: 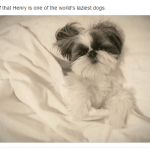 ********************************We’ve been visiting this nursing home for almost a year now. It’s so special to see the relationships that Henry has built with everyone in the past year. Even those with the worst memories recognize Henry when he comes now. The man who never talked or moved for the first eight months of our visits now pets Henry every time and usually says something as well. The lady who was a too bashful to talk much at first starts singing the moment she sees Henry coming these days. Since 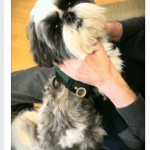 stroke, one lady still can’t pronounce things well but now that we are old friends she babbles on and on, without a hint of her former embarrassment, until Henry finally has to leave. Many have always loved Henry. They just come to love him more and more each visit. The staff knows and loves Henry now, too, and even the few residents who’re afraid of dogs adore Henry these days. It just goes to show that great things can happen when you take the time faithfully to serve others week after week. The relationships you create are the ultimate reward.

This is a sketch I did of Henry reading with one of the struggling readers at the local elementary school. Sometimes Henry lies on his back and listens while the kids read to him; sometimes he sits 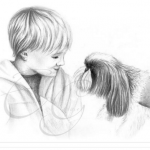 up and looks at the pages. Now and then, he just looks at the kids to let them know that he knows they can do it. This was one of those moments.

The child in this picture is autistic and dyslexic, and can rarely read, or even calm down or concentrate. With Henry in the room, however, he sat still, read slowly and clearly, petted Henry gently, and said that he had enjoyed reading, once he was finished! A few days later, he even wrote Henry a thank-you note, all by himself!

“Have you been sick?” a lady asked Henry at the nursing home today. “No? You must have been on vacation.” She said as she stroked and loved on Henry enthusiastically. “I missed you so much. I was telling everyone how worried I was about you. I’ve missed you!” 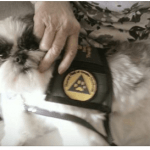 Of course Henry hasn’t missed any visits recently, but the last couple weeks when we came, this lady was unavailable at the time we were there, so we weren’t able to visit her. I never realized how much Henry’s visits meant to her, but she noticed that she hadn’t seen him in a couple weeks! 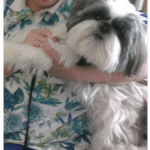 Henry visited with her for at least twenty minutes before the lady was finished talking to him (she had to fill him in on everything he had missed since the last time she talked to him!). They both enjoyed every second of it.

Henry is a Shih Tzu who loves everyone he visits, but it’s fun to see that they love HIM too!

When was the last time you visited someone who is lonely or can’t get out often? Tell us about it!

Henry had a great time at the library today! He got to sit down (or

more accurately, lie on his back) while the kids practiced reading to him. Henry thinks it’s the perfect activity!

Reading to Henry helps to boost young readers’ confidence and to motivate them to practice reading more. 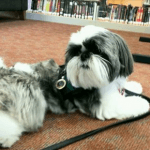 Reading to a therapy dog instantly creates a safe, fun, nonjudgmental environment where struggling readers can gain confidence in their reading, and proficient readers can learn to enjoy reading and going to the library even more than they ever did before! For more information on the benefits of reading to therapy dogs, Henry suggests looking at http://www.therapyanimals.org/R.E.A.D.html. 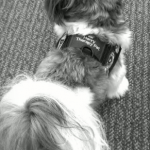 One of our favorite residents, a WWII vet who shares the same name as Henry, has been at the hospital lately. We haven’t been able to see him for several weeks. Today he was back at the nursing home and my Henry was very excited to see him, but the man didn’t notice him.

Henry reluctantly went on with me to visit the next resident, but when we passed his room on our way back out Henry was determined to visit him. With the nurses’ aid, the man finally woke up and realized that Henry was there. He was so happy – it was like watching a reunion between two old friends. 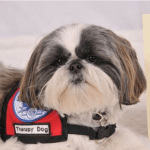 He seemed to forget about the pain he was in as he petted Henry and talked about how ‘rotten’ he was. As I watched them, I realized that my Henry was just as happy as the man was that they got to see each other again. It goes without saying that the residents love their visits, but some people have asked if Henry really enjoys visiting. The answer is yes.” 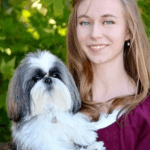 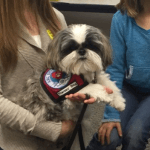